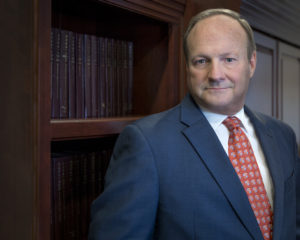 Admitted to practice:  All Florida Courts, The U.S. Court for The Southern and Middle District of Florida, The U.S. Court of Appeals for the 11th Circuit, The Supreme Courts of the State of Florida and of the United States of America.

Carlos C. Del Amo is the founder and president of Del Amo Law . Mr. del Amo was born in Havana, Cuba on September 26, 1953. He is the second oldest child of Carlos Blas and Olga Perez. He has an older sister, Gisela, and younger brothers, Dr. Ramiro Eduardo and Carlos L. del Amo.

On April 17, 1961, Cuban freedom fighters invaded Cuba in an attempt to overthrow Fidel Castro. The assault ended in disaster. Olga was working for the American Embassy at the time and was given immediate residency for the entire family. Believing that the ill-fated invasion would shortly be followed by another successful one, Carlos Blas, on April 29, 1961, sent his son and daughter with their mother to the United States for a short stay. Mr. del Amo has now been in the United States for over 47 years and he is a United States citizen.

After attending Loyola College in Baltimore, Maryland, Mr. del Amo studied at Florida International University. He graduated in 1976 with a Bachelor of Science in Psychology. He began a master's program in Psychology at Barry College but had to leave the program before completion to support his family. In 1985, at the age of thirty-two, Mr. del Amo returned to school, this time to earn his J.D. from the University of Miami. He graduated in January 1988 and became an attorney in September of that same year.

From the age of eighteen to his entry into law school, Mr. del Amo was a businessman with such diversified pursuits as a shoe and handbag manufacturer, designer and importer; a nationwide wholesaler of handbags; a cold storage manager; a meat broker; a grocery store owner; a real estate broker; and a mortgage broker.

Mr. del Amo's law career began with the law firm of High Stack Lazenby and Palahach. For the next seven years, Carlos was a litigator for the firm, first as an associate, and later as a partner. In 1996, Mr. del Amo opened his own offices in Coral Gables.

Mr. del Amo has over 26 years' experience as a litigating attorney and 17 years as a businessman and entrepreneur.  He is "AV" rated by Martindale-Hubbell for very high legal ability and ethical standards, was listed in Who's Who for Practicing Attorneys in 1990 and Who's Who in Executives and Businesses 2001-2002.  Additionally, he is a Member of the Million Dollar Advocate Forum.